Should I Get a Flu Shot?

Every autumn, we’re bombarded by a big push from the media, hospitals, our kid’s schools… It seems like everyone around us is telling us that we need to get a flu shot. But are they effective? Are they safe?

The annual flu vaccine is recommended for everyone 6 months and older. It claims to boost the immune system and help prevent coming down with the seasonal flu. Pregnant women, children, the elderly, and those with autoimmune complications are especially targeted as needing to receive a flu shot.

Conventional medicine says that the human body is unable to naturally support immune defences and prevent threatening environmental agents. But this is untrue. In fact, flu vaccines are increasingly shown to be ineffective and even hazardous to our health.

The first vaccine was developed by Edward Jenner in 1796 to combat smallpox. Since then, pharmaceutical companies have developed a multitude of vaccines combating a number of illnesses.

Vaccines involve injecting a person with a partial material of an infectious agent. Substances called adjuvants are added to stimulate the body’s immune response to the infection so that antibodies can be created to defend against future attacks.

The Scare of Epidemics

Before modern science, there was very little knowledge regarding the spread of infection or other serious health threats.

Today we understand that the human body must be equipped with the lifestyle tools to build its immune system, which can protect us from life-threatening pathogens. Nevertheless, informational pamphlets, free vaccine programs, and the threats of medical providers have convinced us that vaccination is the answer to preventing illness. If the government and your trusted family doctor encourage the flu vaccine, why would you question them?

In the 1980s, the U.S. Department of Health and Human Services established the National Vaccine Injury Compensation Program (VICP) to provide financial compensation to individuals who have been injured by a VICP-covered vaccine. The VICP received over 3,000 claims related to the influenza vaccine over a 28-year span. Of these claims 2,928 were associated with serious injuries and 114 included fatalities linked to the influenza vaccine.

What’s in the Flu Vaccine?

The U.S. Centers for Disease Control (CDC) releases new vaccination recommendations annually dependent on the type of viruses they are predicting will be most common that year. A variety of flu shots are available based on a person’s age and the location of injection. For the 2016-2017 flu season the CDC recommended either the inactivated influenza vaccine (IIV) or the recombinant influenza vaccine (RIV).

The following ingredients found in the flu vaccine:

What are the Potential Dangers of Getting a Flu Shot?

Dangers of receiving the flu vaccine include the following: 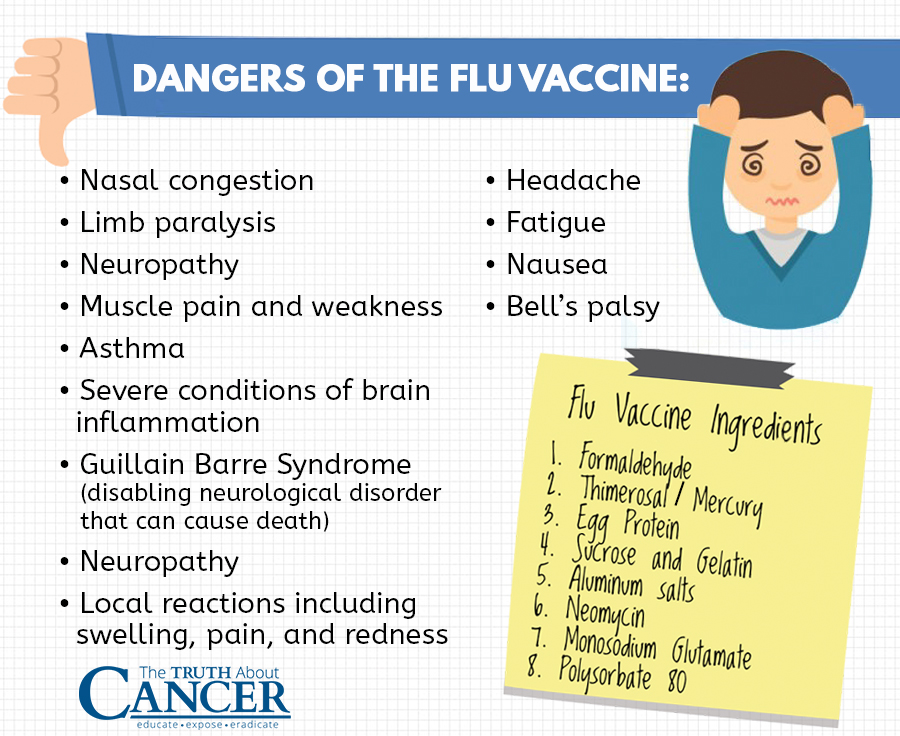 Is There an Increased Risk for Neurological Dysfunction After Getting a Flu Shot?

One of the greatest biologists and immunologists to date, Dr. Hugh Fudenberg was ridiculed for his speech given at the International Public Conference on Vaccination in 1997. In his comments, he stated that receiving the flu vaccine five years in a row had a tenfold increase on the risk of developing Alzheimer’s Disease. He had found in his research that mercury and aluminum accumulates in the brain leading to cognitive impairment.

Many researchers today believe that our exposure to environmental toxins, including the heavy metal exposure we receive from vaccines, is causing the increasing rise in neurological degenerative diseases. These diseases include Parkinson’s, Alzheimer’s, and ALS (commonly known as Lou Gehrig’s disease).

There is no single virus that causes the flu and there is no single flu vaccine that protects against all strains. Scientists have to make their best assumption as to which they think will be the most common threat each flu season. More than 3,000 various strains of the virus are narrowed down to 3 viruses to create vaccines.

In other words, the flu vaccine does not protect you against all influenza viruses which you may fall ill from. Each flu vaccine contains components from the 3 predicted viruses so that the human body can increase its production of antibodies. Not a reliable science − this assumption also does not take into account the fact that viruses are constantly adapting to the environment. This decreases the likelihood that your flu vaccine guarantees you protection.

Even if you are fortunate enough to receive a vaccine for the proper strain, it will be useless if your body hasn’t produced a full response (which takes 2 weeks) or if there is too much time (over 3 months) between the vaccine and viral exposure. The virus may have adapted over time to create a structure the body fails to recognize. This means that your body may fail to equip itself in the initial 2 week vaccination period and the antibodies your immune system has produced may no longer recognize the changed virus or viruses 3 months following vaccination.

Relying on an annual flu vaccine to protect you and those around you from the flu does not benefit your health or offer your best chance of protection. The immune system can become damaged from a vaccine, especially if it is weakened from low vitamin D3 levels, gut dysbiosis, subluxation, and an inflammatory diet.

Follow the steps below to maximize your likelihood of staying healthy and free of the flu this season:

Endometriosis Article from What Doctors Don't Tell You Jan 2021

Everything you need to know about Vitamin D

A lesson in Homoepathy for Coronavirus

For the best Vitamin C you can't beat Liposomal